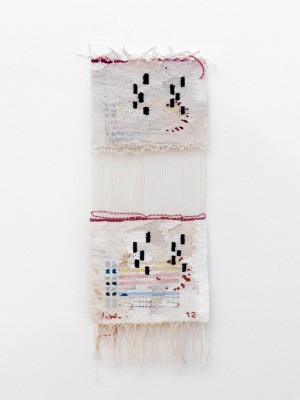 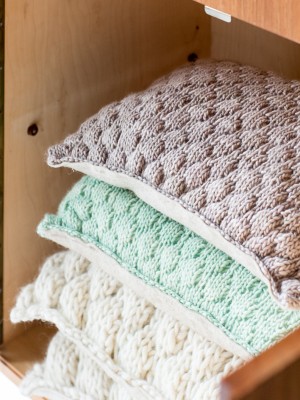 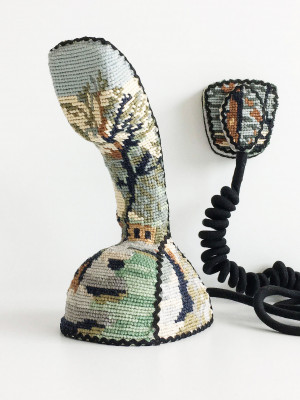 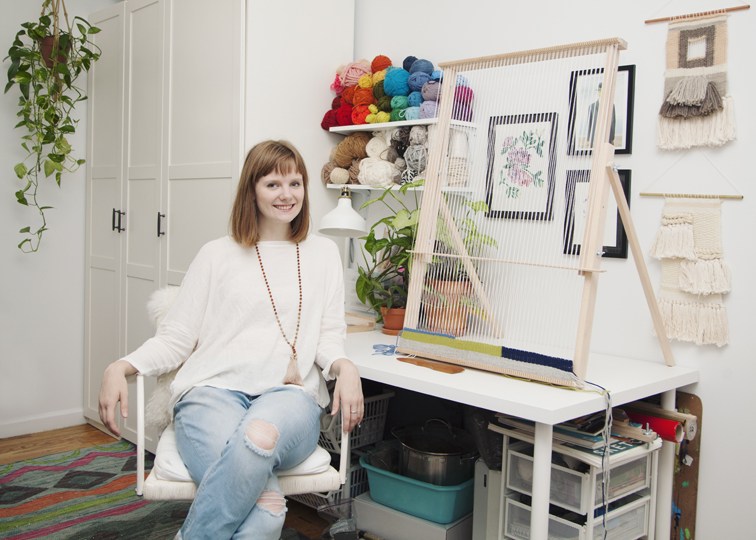 With a background in graphic design and an interest in art history, weaving seems like the ideal art medium for emerging Brooklyn-based textile artist, Jillian Bass. A varied collection of weaving works that showcases an impressive grasp of colour, contrasts and design elements, we are loving the mix of muted and bold colour palette of her handwoven wall hangings. Possessing an incredible level of self discipline as well, what caught our attention is the 100 day project that she participated earlier in 2016, where she repeats the same act – weaving on a 7 x 7 inch loom everyday for 100 days! Inspiring yes? 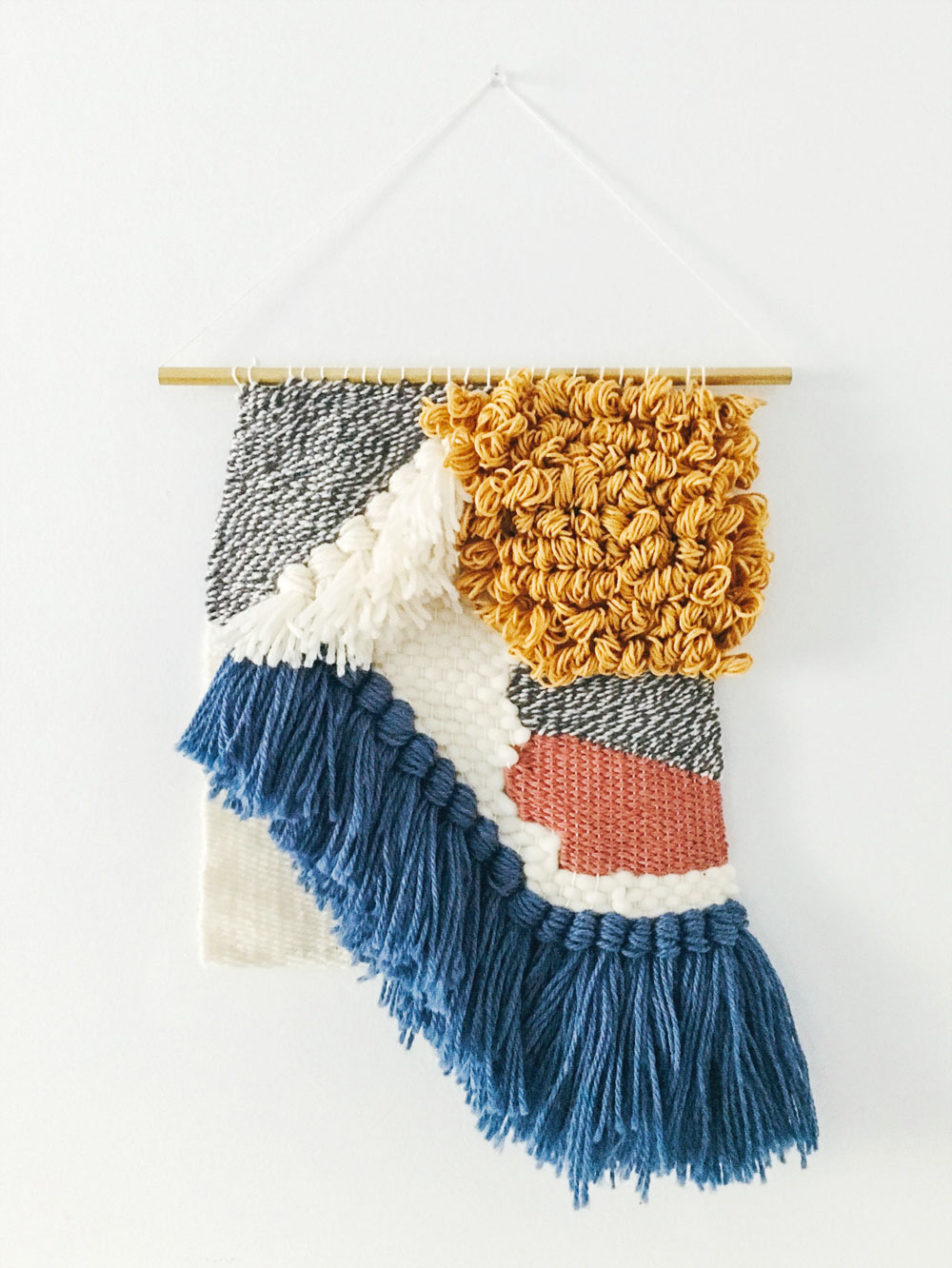 1. Tell us more about your background, and what led you to choosing weaving as a craft?
I went to school for graphic design, and I’ve worked as a Graphic Designer at creative agencies in Boston and New York. Some form of the arts has always been a part of my life; from drawing and painting, dance, design and now weaving. When I moved to New York after school and started working full time as a designer, I really wanted a creative outlet I could do after work that didn’t involve staring at the computer even more. So I started out painting, which is something I have been doing since high school. However, living in a small apartment with roommates and without a dedicated space for painting,  it just became too messy and too much of a process to just set up and put away the work space.

About two years ago, I came across a social media post by a creative that I’ve been following for awhile, Kate Miss. She had posted that she was learning to weave and watching Gilmore Girls (which I admit it definitely made me more interested),  so I decided to try it out since I was looking for a new creative outlet. I’ve found weaving to be a medium that bridges the gap between art and design, and I try to apply the things that I have learned as a graphic designer to weaving while learning more about weaving, textile arts and its place in art history.

2. What makes you a KOEL Kid?
I would say it might be that while my weaving journey is still relatively short, I am constantly trying new materials, techniques, and designs; which make my work so far pretty varied. Also some of my processes and aesthetics as a graphic designer definitely come through in my weavings. 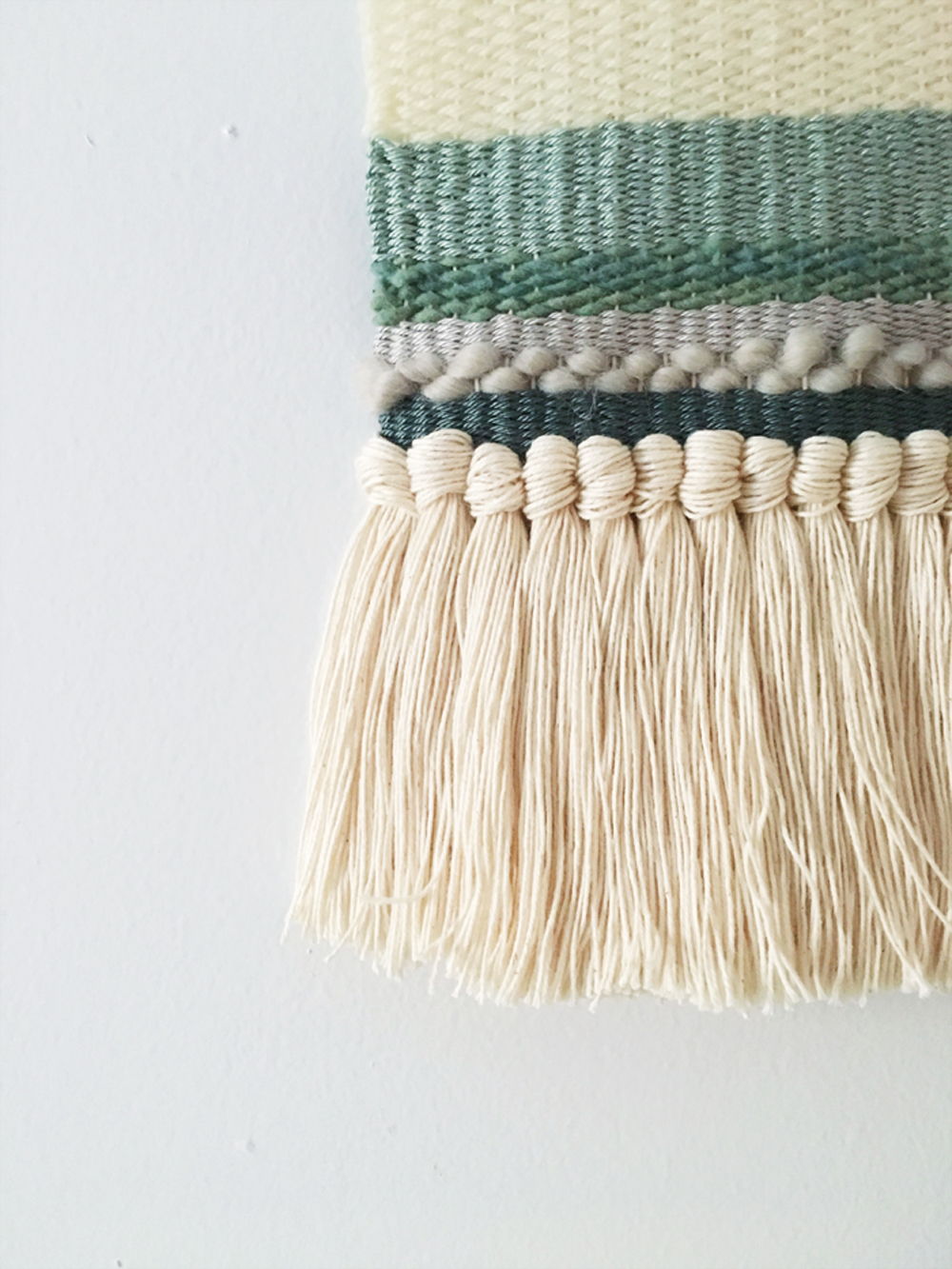 3. Share with us the creative process behind each of your project
I usually pull inspiration from everywhere – other fiber art, painting, design, or color palettes. And then I like to do a loose sketch of what I would like to do, and finding fibers and materials to work with. Sometimes it can be the opposite though, where I find a fiber that really speaks to me and I will work backwards from there. However, for the 100 Day Project I wasn’t sketching anything out but working loosely from restrictions I gave myself that changed every ten days. And the restrictions were pretty loose too, like for 10 days I would work only in black and white and another I would use only the soumak weave. For the 100 Day Project in particular, I think it really helped the exercise by not allowing myself too much time to think about it!

4. Pick one of your favourite designs and answer these quick questions 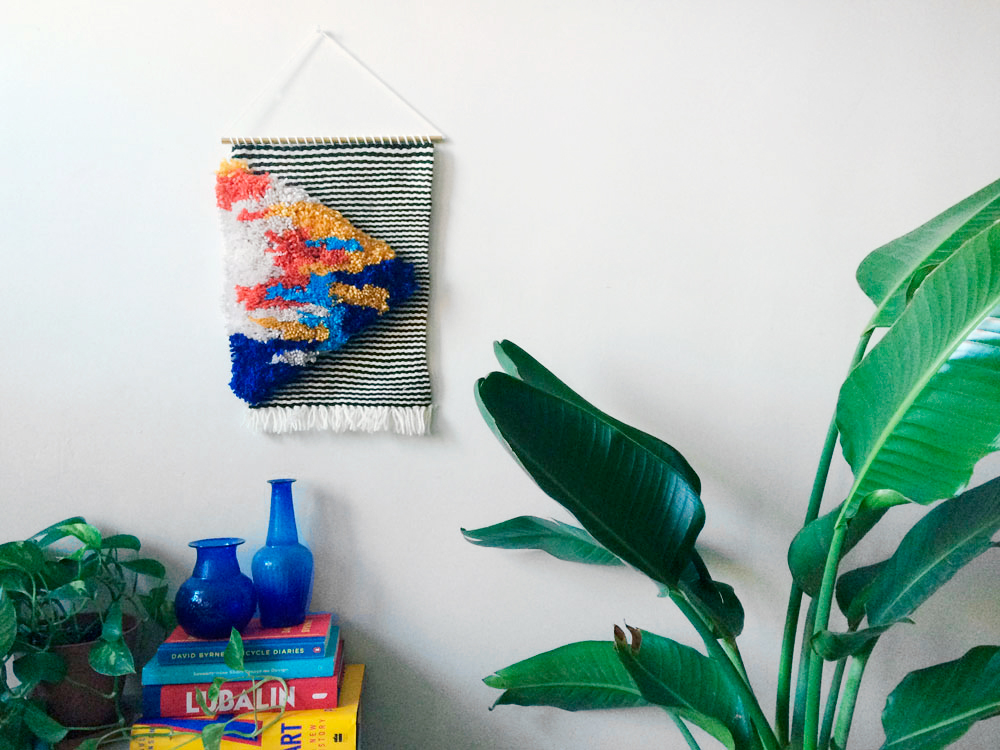 The inspiration behind this design is… Creating contrast. I wanted a piece that contrasted texture, color, and design elements.

The dream store in which I would like to stock this design is… If Marimekko stocked non-Marimekko products, I think it would fit in nicely there. It has a similar bold color palette to their fabric designs.

Which celebrity house can you picture your design at… I will love it if Abbi Jacobson from Broad City had this in her house!

If this design made it big, I would… Make it at a larger scale. And more iterations with different colors.

The project itself is based on Pentagram partner Michael Bierut’s MFA workshop at Yale University (I personally have not been involved in his project). The idea of the project is to repeat the same act every day for 100 days. The act I chose to do was to weave on a 7×7 inch loom every day. The one constraint I gave myself, to both help the days go by faster and to guide myself to explore, was every 10 days I had to change the color palette, style, or technique. The weavings were intended to be more like sketches or swatches, not fully formed pieces. Some of the weavings ended up great, some not so great. Some were made on the train, some were made at 1am. This project was about the daily ritual of designing and making and not aim at making specific perfectly formed pieces.

I really learned a lot from this project, first and most importantly being that I have the capacity to do something creative for myself every day. I’m very lucky that I work in the creative field and I have a job as a “creative”, but it is a lot different when your project is for what a client wants or what a client should want instead of something that is strictly in your interest. So just having that freedom of knowing every day I had time set aside for that was a great thing to take away from the 100 Day Project. But outside of that, it was a fantastic way to really experiment and learn techniques that I maybe would not have tried if I was doing something on a larger scale. And with the mindset of each day not having to be a finished piece, it allowed for a greater exploration of all different aspects of weaving and design. 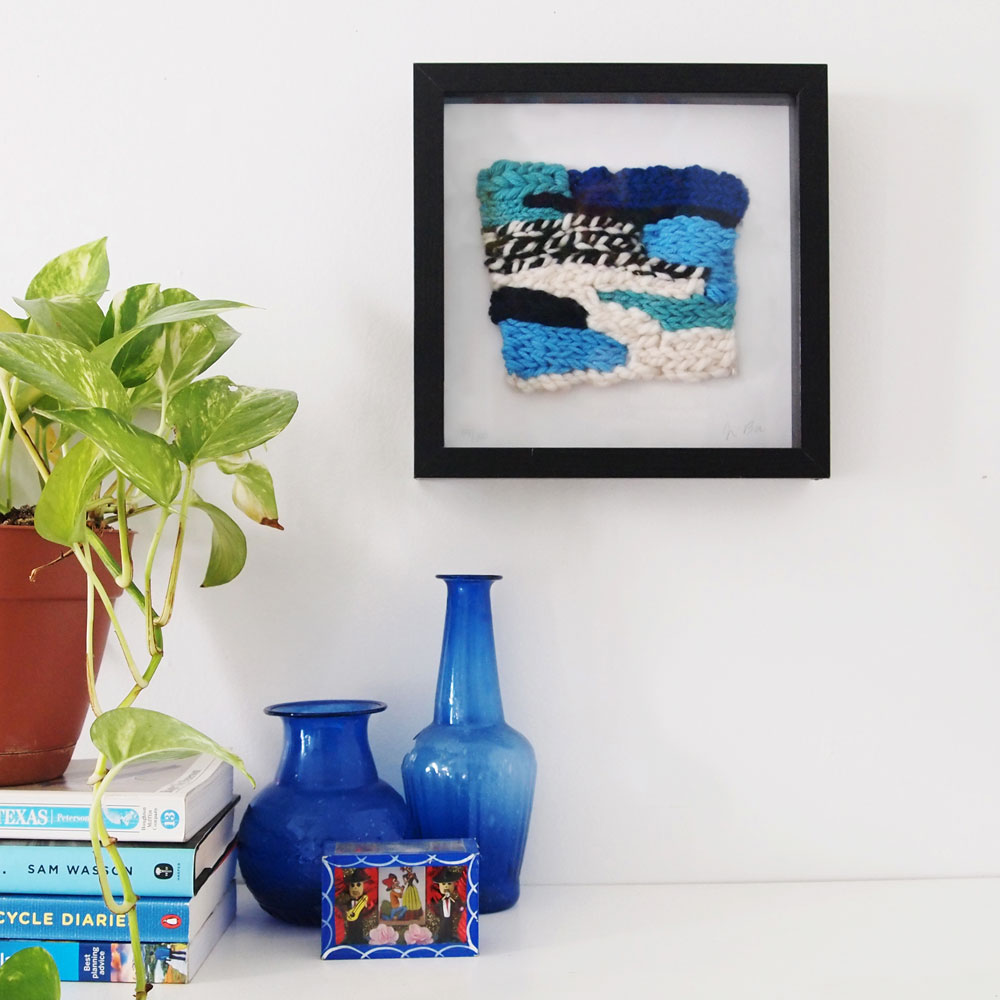 6. Great things take time, so how much has changed since you first started weaving and where do you see it in the next five years? A lot has changed! One of the bigger things is that I am no longer working on a cardboard loom, like I was when I first learned how to weave. Since I am still relatively new to the craft, I am still exploring and haven’t found my distinct aesthetic just yet, although I feel like I get closer with each piece I get.

In the coming years, I would love to learn how to weave on a rigid heedle or a large floor loom. I think it will be the next step in my weaving journey! 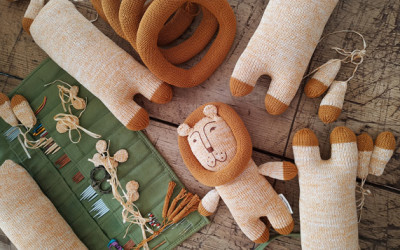 December 20, 2021 by KOEL Blog
Everyone needs a nice cuddle every now and then. And we think we might have just found the prettiest (and most huggable) in the land of soft friends. They make great gifts for the little people in your... 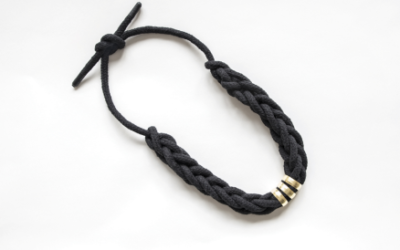 November 30, 2021 by KOEL Blog
Let's meet talented designer Sarah Shakespeare who is best known for her gorgeous, internationally praised jewellery collections and a great love for macramé and various materials. 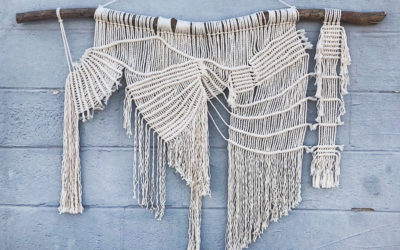 July 21, 2020 by KOEL Blog
Let’s meet fibre artist Emily Nicolaides, and find out all about her arduous journey and her growth as a weaver. 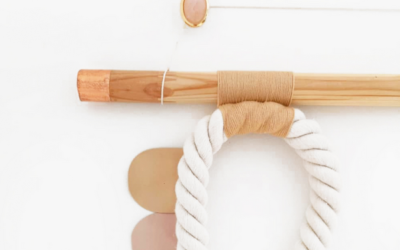 May 23, 2020 by KOEL Blog
Let’s meet Alesia Hnatiuk of Small Wave Art, who fell in love with the relaxing and calming movement of weaving and macramé. Let's find out all about her path and future plans. 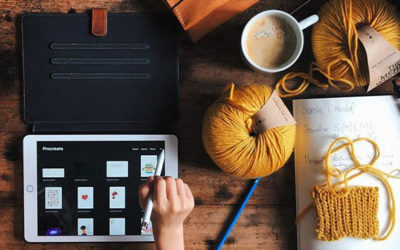 May 8, 2020 by KOEL Blog
Let’s get to know this fun and refreshing fibre artis. Let's interview Vaskavullaknit, and find out MORE about her creative path and humble vision. 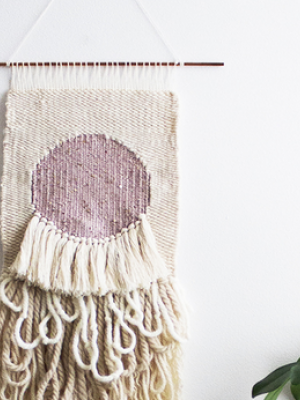 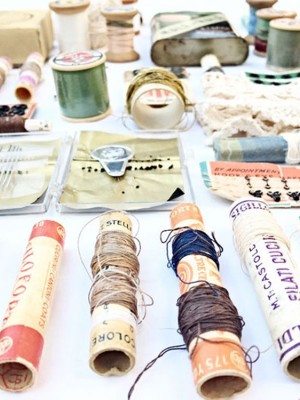 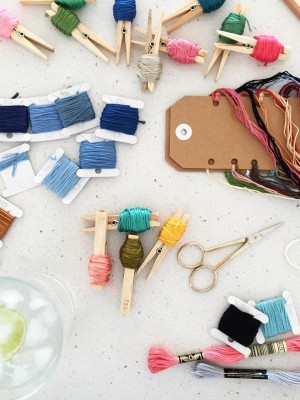